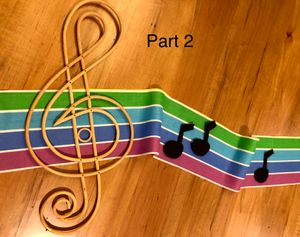 I have read cozy mysteries that included recipes, but never one that included recordings of songs. As I said in part one of this post, I wanted my cozy mystery to be filled with the sounds and experience of music-making. I imagined the reader actually listening to the music as it was performed in the story, no matter the physical form of the book.

In the hard copy book, I envisioned something like a QR code that could be scanned to play the songs, maybe even a CD tucked inside the cover. On a digital reader, the music could be queued up by clicking a link. In an audio book version, the music would be part of the recording, woven seamlessly into the story.

I chose a music festival as the setting to create as many opportunities as possible to include the performance of a song in the natural course of the story.

The Oak Hill Folk Festival opens with a musical "jam" where the attendees gather in a big barn to make music together. Someone starts a song and then everyone joins in, with multiple instruments and voices coming together. As I said in part one of this post, I wanted that opening song to be catchy and full of energy. I originally thought it would be written and introduced by the main character's father, who is also a songwriter.

I wrote "What'll I Do" for the character Peter Cook to perform at this spot in the story.

As the book neared completion, I went back to re-visit the songs, their placement, and the characters who performed them. I decided that "What'll I Do" was in the wrong spot.

I also felt that perhaps Sam Cook (my main character) should join her dad to start the song that opens the first night jam. I wrote a new song, "Livin' the Dream", for them to sing together, and placed it in that first musical spot in the story. I am hoping that the recording of "Livin' the Dream will include multiple instruments and voices and evoke the group dynamics of the festival jam.

I moved "What'll I Do" to a point later in the story where Sam's dad is leading an impromptu jam session in the farm's campground. I like how it fits there.

The last "musical moment" in the book comes after the mystery is solved. The owner of Oak Hill Farm hosts a party on the farmhouse B&B's patio to celebrate Sam's surviving the trials and tribulations of finding multiple dead bodies, being stalked by a killer, surviving a bear attack, and helping solve a murder.

At the party, several people play songs for Sam. I wrote a "I'm Here For You." to be sung by Tang, one of Sam's closet childhood friends, who was with her through the scariest parts of solving the mystery.

I hope you'll stop back next Tuesday to read about the musicians who recorded the music I wrote for the book and hear how their versions of the songs evoke the characters. And don't forget to check out my "Sunday Special" roundup of some of my favorite things.

In fact, why not plan on stopping back every Tuesday, Thursday, and Sunday for a new blog post?